One basic goal, to “convince Haiti” to question their traditional teacher-centered learning-system, is reached. Seeing with their own eyes how much better children develop in a gentle child-centered system like Montessori is convincing. We are being pushed, especially by parents, to continue growing. Not only with preschool, but for primary school improvements as well. Being too small to finance such growth alone, we need additional partners. We need a training-center to continue Training Montessori pre-school teachers (for children age 3-6) most urgently. This being worked on with the help of German building volunteers – please see under “Rebuilding after the earthquake” in the Montessori projects section of this homepage. To add the primary training as requested from Haitian parents an extension, a second set of buildings will be needed on existing ground, purchased by the Fondation-Peter-Hesse for this purpose. Such extension would also make the whole project even more self-sustaining – which is a final objective. A detailed concept is developed and would now “only” have to be implemented together with future international partners.

The need for an extension into Primary teacher training is not new. We had already prepared such a project and in 1997 bought suitable land of the size of a football field in Tabarre, Haiti, Unfortunately, in 2006, the land owned by the Foundation has been illegally “re-sold” by someone unknown to someone equally unknown. The distressful legal situation in Haiti has not yet allowed to “bring light” into this strange matter. But basically the underlying need for a Foundation-owned training center is unchanged.

The Montessori-preschool project in Haiti is not only very well received by the Haitian population benefitting from the good development their children in our projects. The project is also considered to be a “model” – by the worldbank – not only for Haiti, but beyond. In April 2000, the model was presented in a World Bank-conference INVESTING IN OUR CHILDREN’S FUTURE in Washington DC, and in a UN-conference in New York in the framework of Kofi Annan’s “Global Compact” in June 2000. This initiative of the former UN-Secretary General aims at integrating business, especially multinational organizations, into social development in ONE world.

At this “Global Compact” presentation in June of 2000 in New York, we suggested to companies who are working in deprived countries: “Do hire a qualified Montessori-teacher/trainer to care for the children of your employees during work-hours. After work-hours such Early Childhood Specialist could train ladies from the area to be preschool-teachers – just as it is being done in Haiti. The successful students could then open simple Montessori preschools – just as they do in Haiti. Besides the cost of the training, starting-cost for preschools would be “peanuts” for the well-doing corporations. – Their PR-managers would love it. – But it would also add one truly valuable piece to the regional development-puzzle. Like in Haiti, it could create the desired chain-reaction.”

Unfortunately, up to now none of the “Global Compact Companies” followed this suggestion. – This “failure” should, however, not discourage anybody. New possibilities are seen to expand the successful Montessori-model to some countries in Africa with the help of the new Montessori teacher-training manual, “Atelier Montessori”, developed by Carol Guy-James Barratt, printed in 2007.
To conclude: Whatever qualified child-centered didactical method is being used and whoever carries the initiative further: Deprived children in ONE world in diversity can and must get a fair starting chance in life in this critical period from (and before) birth to the beginning of school-age. This time in life is most essential for development. It can be done. We just have to take up and support such initiatives. GIVE CHILDREN A CHANCE ! – Development is a basic right.
Peter Hesse

Besides our development perspectives for deprived children in Haiti and in our “ONE world in diversity” through the Montessori method, the German Peter-Hesse-Foundation must also plan its future in Germany itself. This is being done in the year 2012 – parallel to the renewal of this homepage.
There are two sections dealing with this question in the German section of the homepage.

A summary of our concept for the future:

“Plan A” – failed:
The Hesse-family company, “Schmincke artistists’ colours”, founded in 1881 by my grandfathers uncles, Hermann Schmincke and Josef Horadam, was supposed to finally be owned by a new Hesse family-foundation which in the future would use its free earnings for the work of the Peter-Hesse-Foundation. This concept failed because the Schmincke co-owners, my brother and sister did not want to participate in this plan. This resulted in the separation of the foundation capital from the Schmincke-company and in a new formal address of the Peter-Hesse-Stiftung (see below).

“Plan B” also had to be dismissed.
The large German NGO “Welthungerhilfe” (especially working for food security in the world), our friends in Haiti since even before the creation of the Peter-Hesse-Foundation in 1983, was supposed to support and supervise the Montessori project in Haiti by merging the independent Peter-Hesse-Stiftung with a small “Peter-Hesse-Treuhandstiftung”, created especially for this purpose.
The necessary rebuilding of the Montessori-teacher-training center after the January 2010 earthquake in Haiti was, however, creating financial. bureaucratic and conceptual obstacles. The differences of a large well-staffed development-enterprise and the basic roots-orientation of our Haitian Fondation-Peter-Hesse, working with highly motivated self-trained teachers and their “social businesses” in the form of preschools for deprived children created Frustration and insecurity. I therefore researched alternatives for a child-centered “fitting” solution – and found a very suitable structure:

“Plan C” secures the future with least possible administrative expenses in Germany as well as in the fulfillment of the key foundation-purpose, to provide a chance in life for children at the grass-roots level through education in Haitian ownership.
The open secrets of this healsolving* plan C are administrative cooperation’s with like-mended structures at home and trusted transparent partnerships on basic levels in the field. Like-minded administrative partnerships have been created with a suitably-sized German/Swiss Foundation structure, the Schmitz-Stiftungen in Düsseldorf, Germany and in partnership with the “Association Montessori Internationale (AMI)”, in Amsterdam, Holland. The President and the Executive Secretary of this leading global Montessori umbrella-organization will join the slim board of the German Peter-Hesse-Foundation and shall secure the best possible use of foundation funds and donations for the benefit of children in need in ONE world in diversity – in the spirit of the “Educateurs sans Frontières (EsF)”. EsF is the AMI-branch for bringing the Montessori-method to less fortunate children in the world, thereby following Maria Montessori’s legacy. Our Montessori-directress and long-term project partner Carol Guy-James Barratt is part of this new structure and will continue her work for children in Haiti and especially with her locally trained teachers to secure the further growths of the Haitian and African projects until their self-sufficiency.

I prefer the word “healing” to “helping” or “aiding”. Both terms, “helping” as well as “aiding”, sound patronizing. These words may create the impression of an intervention from the outside or from a superior situation. “Helping” makes sense, when the word is used referring to one’s own activities, like in “self-help” or in emergency situations. In the early years, I innocently used the word “helping” extensively in my original guidelines. It may not be important, how the healing or problem-solving process is called, but it forced me to reflect on the inner meanings of the various words which are being used in this process. This reinforced my skepticism about the interventionist word “helping”, which I now try to avoid.

The word “healing” refers mainly to beings which heal themselves. Some animals can even re-grow parts of their body, which were cut off. With human beings, a wound heals. Healing is like developing. Nobody, nothing can be developed – or healed. No healer can really heal. He can only stimulate or advance the healing process, a natural or learned capacity which, of course, is to be highly valued and praised. The main work is, however, done by the one to be healed. Development and healing happen from inside.
This may be an extreme position – especially in the eyes of the healing profession. The only human healing, which truly comes from “outside”, in my view comes from some unknown and unspeakable other dimension. But here the question is, whether there is a difference at all between “inside” and that very special “outside”. This touches a different subject, a spiritual belief system, which reaches beyond our subject here.

In the witnessed reality of trying to heal development problems, my view grew steadily and firmly that (at least on a micro-level) healing must happen from inside the healing system. In any case, it helps to be careful and conscious about the hidden meaning of words like “helping”, when referring to actions from outside. “Heal-solving”, in my view, is an expression, which fits reality. “Solving”, the second part of this expression indicates a “softening” of “hard” facts. It is connected to “melting”. Angaangaq (“The man who looks like his uncle”), a gentle Inuit shaman, uses the image of “melting the ice in the heart of people” as a pre-condition for problem solving in the world.

“Solving a problem” is work done by individuals or groups. In my experience, “solving a problem” often involves team work. It always demands community between the healed and the healing and it often also involves an enlarged community of those concerned in the process. Heal-solving is a mutual process in which the people, who want or need to be healed, take the initiative and – whenever possible – lead in the problem-solving process.

The verbal creation “heal-solving” by a German, whose mother tongue is not the English language, is a result of reflections about the one principle, which proved to be of utmost importance in the 28-year learning process in trying to “heal-solve” problems, mainly in Haiti. It became a leading principle for successful interventions that desired development – or healing – must start from the inside of those, who want to develop or heal themselves. 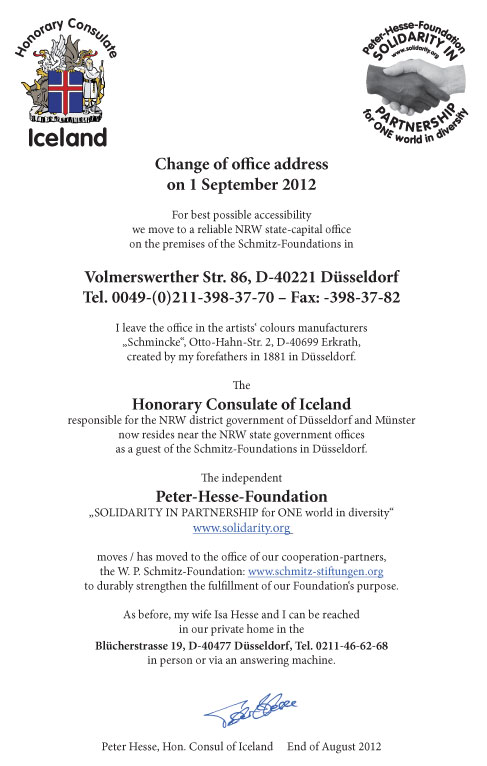