A workshop for teachers to make reading materials for their classrooms was held on January 13th and 14th at the Foundation’s residential training in Liancourt. The workshop was attended by teachers who started new schools as well as teachers from schools in the areas which was affected by hurricane Matthew and had to replace their water damaged materials. 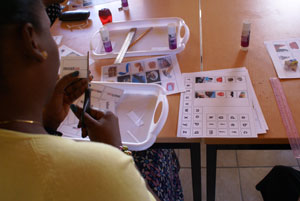 Teachers making reading materiels for their classroom – On the 20th Jan.

The First Secretary of the German Embassy, in Haiti, Frau Stefanie Kestler, visited our teacher training center in Liancourt on 8 February. Madame Kestler expressed her satisfaction in the work being carried out by the Foundation. She has visited two of our partner preschools i n the past and appreciates the results of having well-trained teachers. 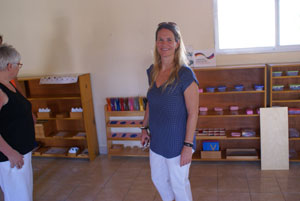 We made technical visits to three schools so far this year in Jan. + Feb.

1- Institution du Bon Pasteur, in Lasserre-commune, Croix des Bouquets a new school which opened in October 2016. The school was opened by the Kernizan family, whose sons attended the Peter Hesse Foundation’s demonstration preschool 25 years ago, and are now working professionals. The family wanted the children in their area to benefit from the same education as their sons. The Foundation was happy to help them by giving furniture, and materials for the school, as well as scholarships to train their teachers. 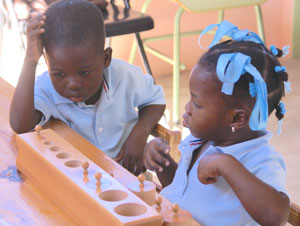 At the institution du Bon Pasteur, in Lasserre 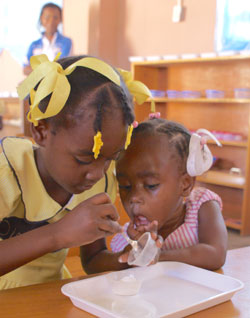 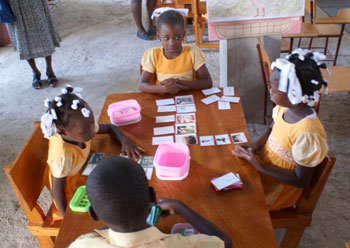 On the 20th January Ecologist Jane Wynne conducted a workshop on the environment with student-teachers who are currently enrolled in the Montessori teacher training course. Jane Wynne addressed the issues of finding positive solutions to help children realize their potential influence on the environment. Student-teachers learned that it is necessary to protect the environment since environmental degradation is a critical concern in Haiti, and not only poses a serious threat to lives and livelihoods, but the widespread deforestation, particularly in the hillsides, has led to flooding, dramatic rates of soil erosion, and subsequent declines in agricultural productivity.

Students visited the Wynne Farm Nature Reserve in Kenscoff and saw firsthand, composting methods, vertical planting, and different planting techniques. They also saw alternative environmentally friendly buildings, one made from Bamboo, one from recycled styrofoam plates and one from earth filled bags used in place of bricks. There were also endangered species of plants and birds. 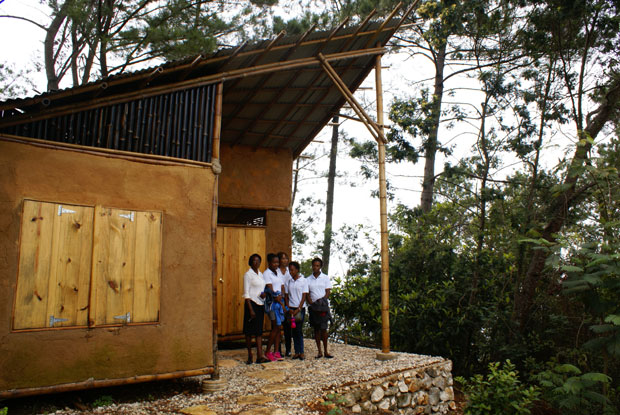 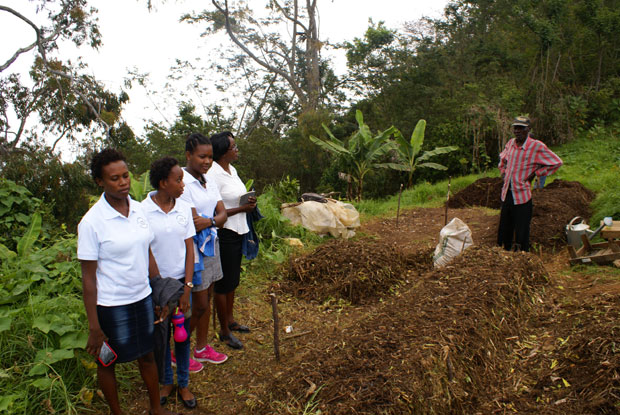 To English-speaking friends and supporters of the Peter-Hesse-Foundation – a short report from our 30-65-80-birthday invitation on 21 April – and onward.

After a short board-meeting of the Peter-Hesse-Foundation deciding on future positions on the Foundation-board, we celebrated “life as a gift – and a challenge”, with 161 guests, mostly friends and supporters of our Foundation’s work to train Montessori preschool-teachers in Haiti:
Successful 30 years of Montessori teacher-training (which was initiated in October 1986 by Carol Guy-James Barratt from Trinidad and me). We also celebrated Isa Hesse’s 65th and my 80th birthday The guests donated € 12.175,64, which I rounded up to € 24.500,- for our EsF-AMI Montessori-project for deprived children in Haiti.

On 26 April, Carol flew back to Haiti, Isa and I travelled to Iceland to participate in the third SPIRIT OF HUMANITY Forum with almost 200 spiritually motivated parti­cipants from around the world, who are actively engaged for a better balanced fair world.

On Saturday, 29 April, I stumbled and fell with my head and body on the pavement. In the Icelandic hospital LANDSPITALI in Reykjavik, the hole in my head was cared for with nine stitches, my hips X-rayed and then my left neck of femur was opera­ted on, fixed with two long nails, all on that same day.

On 4 May, the German Red Cross flew me back to Düsseldorf, where – after a few initial days in a hospital – I was transported home into the caring hands of Isa and physiotherapeutic home-treatments. Since that time, I am fighting the pain with heavy medication and, of course, had to cancel most planned summer-activities.

“The purpose of the Peter-Hesse-Foundation (is) to contribute to a just and peaceful learning ONE world in diversity – with emphasis on providing children a chance through child-centered early education to enable life-long learning”.
This primary purpose is maintained in Haiti (and also in the Ivory Coast in Africa) under the leadership of Carol, the highly motivated directress or of the Peter-Hesse-Foundation in Haiti. The other – overarching – Foundation’s purpose for “a learning world” also develops well – not in Haiti but in London:

Supported by special Foundation-grants (humble “seed-money” – since 2014 from part of my life-insurance and from Foundation board-members), the special guest at our multiple April birthday-celebration, Dr. Rupert Sheldrake works on scientifi­cally verifying his morphic-resonance hypothesis that all is interconnected with all through learning. This research is proceeding well. As soon as results are being published in a scientifically professional way, we, the Peter-Hesse-Stiftung, will also report about the results on our homepage www.solidarity.org and on my new personal homepage www.peter-hesse.info.

Fruits of our Labour

Planting and caring for trees at the teacher training Center is paying off. We are already harvesting fruit and serving it in our student cafeteria, including mangoes, tropical cherries, bananas and carambola. We are also harvesting our own sugar apples, bread fruit, papaya and soursop. Our Moringa trees, whose leaves taste like spinach, are also fuller and we have been serving it in our student cafeteria for almost a year.
We continue to compost and teach our students green practices which they can replicate with children in their schools and communities. We feel proud that we are doing our part in making making Haiti cleaner and greener. 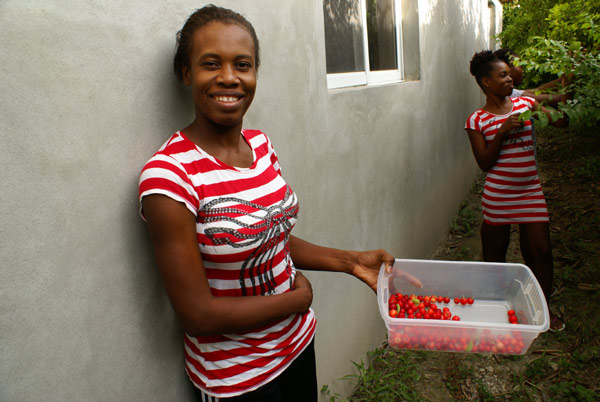 Cheers to the 32 new Montessori teachers who celebrated their graduation on July 15th, 2017 at the Peter Hesse Foundation’s Teacher Training Center in Liancourt. The occasion was marked by speeches, poetry, dance and merriment. The teachers have completed their year-long training course and are ready to begin their careers as Montessori educators. They join an active and supportive professional network of teachers around the country and a long tradition of Montessori teachers trained in Haiti by the Foundation for over 30 years. The guest of honour at the ceremony, the former Minister of Health and former Prime Minister of Haiti, Dr. Florence Duperval Guilluame, praised the graduates for their engagement for Haiti’s children. Dr. Guillaume said it was time to break with the traditional and ineffective approach to teaching in Haiti based on rote memorisation and corporal punishment. She was encouraged that more new teachers are being trained in the child-centered Montessori method to help change Haiti’s future. 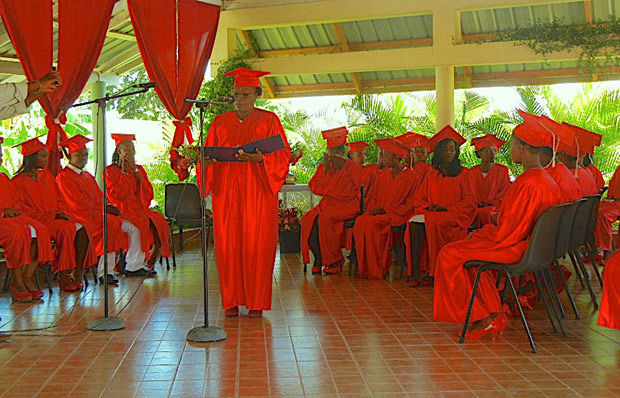 The Center hosted 64 teachers from 19 Montessori schools around Haiti for the annual in-service training this month. These teachers were all trained by us over the years.These in-service seminars are always very popular with our teachers, both to learn new classroom tools and to see old friends from their graduating classes again. Many more enthusiastic teachers traveled to the Center for this year’s seminar than were registered. Since the campus only has sleeping accommodation for 40, some slept on the floor and we „poured more water in the soup“ to make room for everyone. Everyone was happy to crowd in together in a good-natured atmosphere. 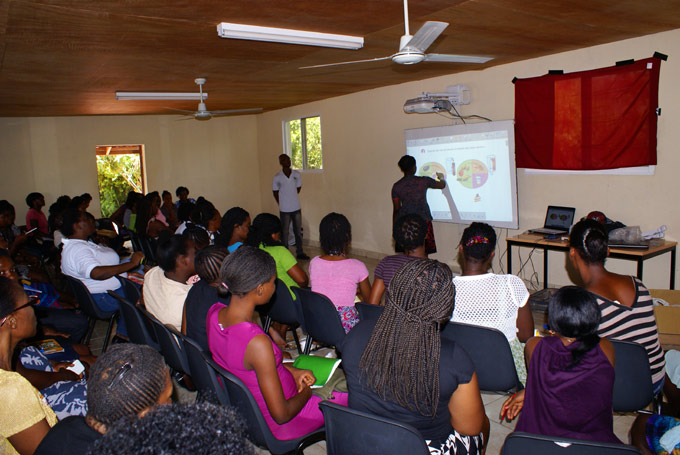 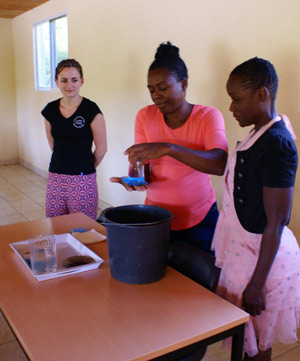 This year’s seminar focused on demonstrations of science experiments. The teachers learned some basic science demonstrations that they can do with children in their their classrooms to teach science concepts. Leading the training was Educateurs sans Frontiers (EsF) volunteer Anastasia Muller from Canada. Anastasia did a great job of explaining that „it was no magic but cause and effect“ by explaining the science concepts, and showed the teachers exactly how to do the experiments. Simple available materials were used so that the experiments could be easily replicated in any setting.

We also introduced the teachers to the electronic white board. This interactive technology is becoming much more widespread in countries like Haiti, and could easily be used to help teach Montessori content. Junior Athénus from Haïti Futur led this session.

An English camp took place at the Foundation’s training center from 8th to 25th August. The children were introduced to the English language by doing fun activities such as learning the „electric slide“ line dance and counting the steps in English. All the activities such as learning songs, doing craft activities and looking at English DVD’s allowed the 25 children who attended the camp to learn English in a more natural and intuitive way, as opposed to learning verbs and grammar. 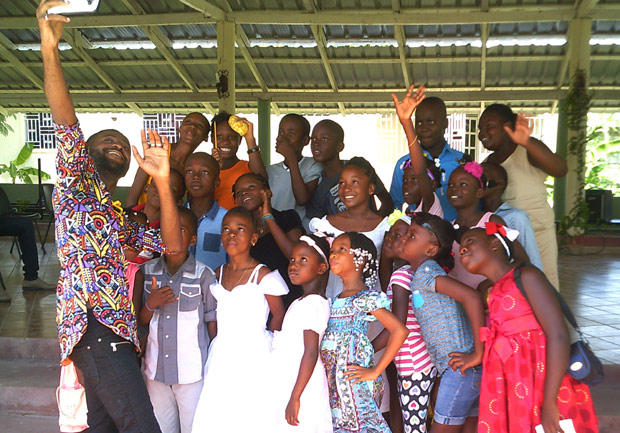 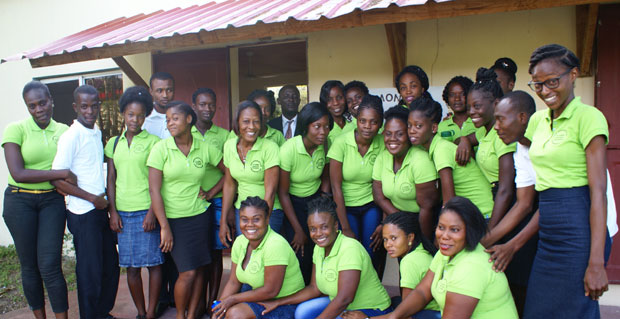 Two days well spent in the teacher-training campus of the Peter-Hesse-Foundation in Liancourt, Haiti: 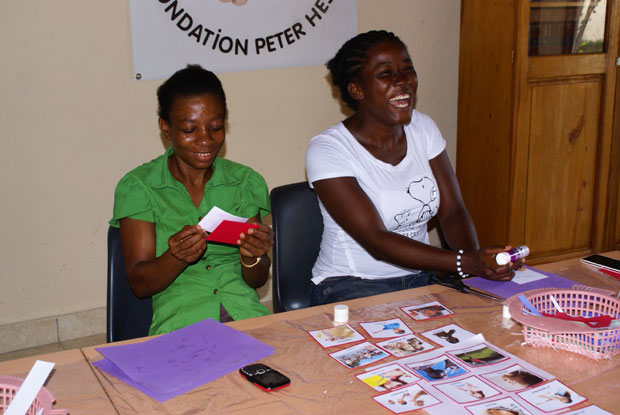 Two of the 7 teachers attending in Liancourt making materials for their schools.

Didactical materials are in short supply in Haiti and most schools do not even have alphabet charts, especially in the countryside.
Sometimes, Carol Guy-James Barratt wishes we could just go out and buy materials because it is a lot of work to make them ourselves. But when we are sitting together, exchanging experiences and talking about our schools and our kids, the ambience of fellowship is worth the work.

Two new Montessori project preschools opened this year:
The new school “Ecole Montessori de Dessalines”, opened by one of our recently graduating students in October 2017 – and the school “Les Petits Genies” in Petionville also opened now by one of our teachers who already graduated in 2008.

Achievements of the Peter Hesse Foundation since the opening of it’s teacher training center in 2013 to 2017.

Since the new teacher training center was built after the earthquake, the Foundation has trained 94 teachers, and helped some of them to set up 6 new schools.

95% of teachers who graduated in the first 5 teacher-training promotions, are employed as teachers in different parts of Haiti. This means that not only is the Foundation directly creating long-term livelihoods for these new teachers, but that more and more children will continue to benefit from a quality education during the lifetime of their careers as teachers.

2,900 more children are now benefiting directly from quality instruction as a direct result of the 6 new schools which were created by our graduating teachers.

We have continued our commitment to improving teacher skills. And over the last 4 summers we have conducted in-service training seminars for 64 teachers from schools in different regions of Haiti, to improve their skills in teaching, as well as workshops for them to make their own classroom materials.

All of the teachers who attended these workshops were trained by the Foundation over the years. Some had only been Montessori teachers for one year. Others had been Montessori educators for over twenty years and were still operating the schools they opened when they completed their initial training with the Foundation that long ago. Staying at the residential training center during the in-service training workshops was also a time for these teachers to share their experiences, renew old friendships and help their younger colleagues.

We also made site visits to 12 schools to provide technical assistance and to assure the quality of education in those schools.